I would say that the food of India and its neighbouring countries of Sri Lanka and Pakistan are having their moment on the ever changing London restaurant scene, but that simply doesn’t do justice to whats happening to England’s long love affair with curries and tandoori chops. In the last few years our simple taste for the humble curry house has been expanded with exciting new restaurants broadening our ideas of the rich cuisine. Tantalising our taste buds away from ‘brit-afield’ curry house dishes like chicken tikka masala and introducing us to a world of Michelin starred curries, Indian street food, Sri Lankan hoppers, and Pakistani lamb chops. This is not to say that I am turning my back on a Saturday night takeaway of a chicken korma, but it’s exciting to see the celebration of both more authentic dishes and exciting modern cultural fusions of the cuisines.

In the last month I have had two indulgent feasts at two places making noise in this new wave of restaurants. From Gymkhana, the Michelin starred Mayfair restaurant that opened 3 years ago set in a theatrical space inspired by the Gymkhana clubs of the British Raj, to the more humble and newly opened Kricket, located only a few streets yet a world a way on the outskirts of Soho, a busy no reservations spot of Indian inspired small plates born from two brits with a love of travels and the Indian cuisine. 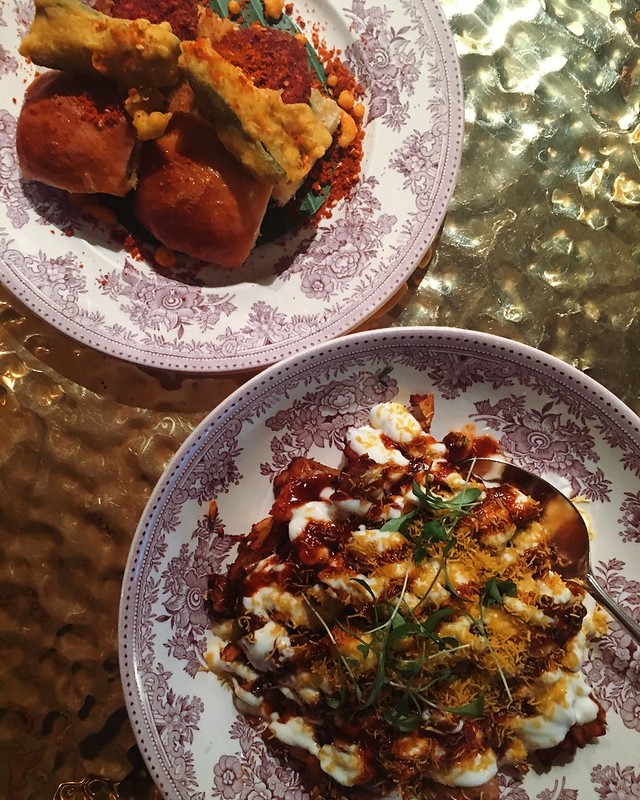 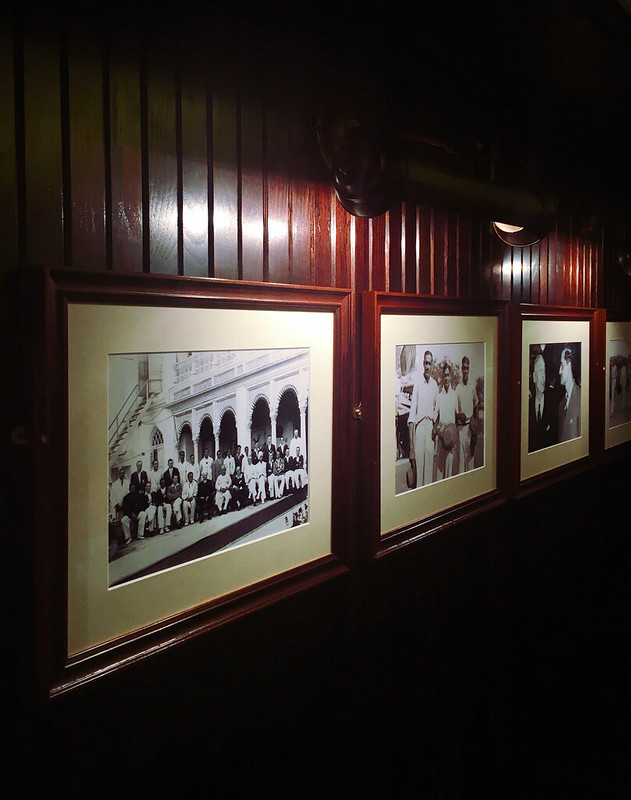 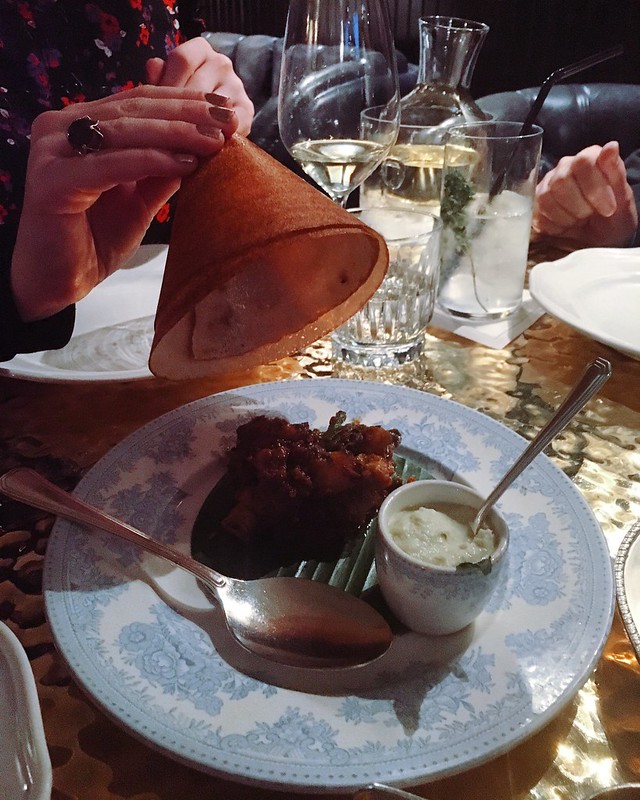 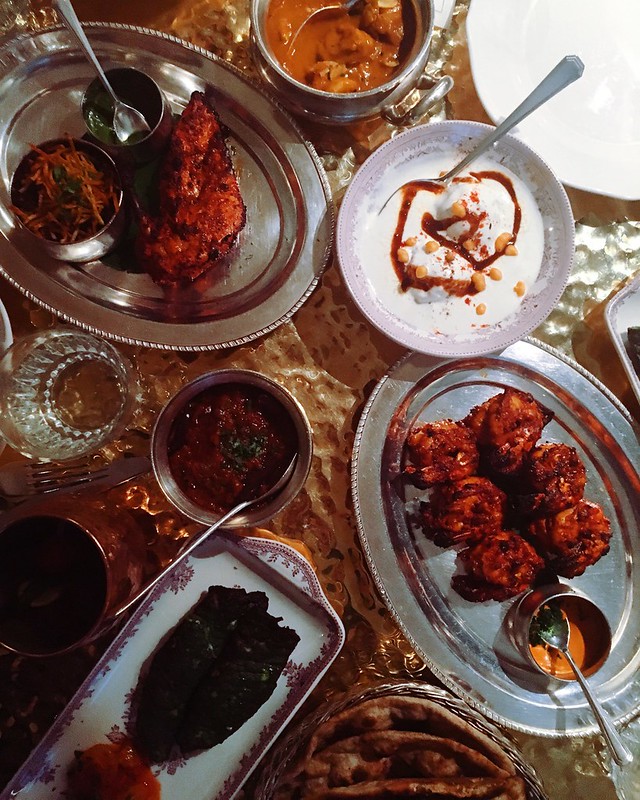 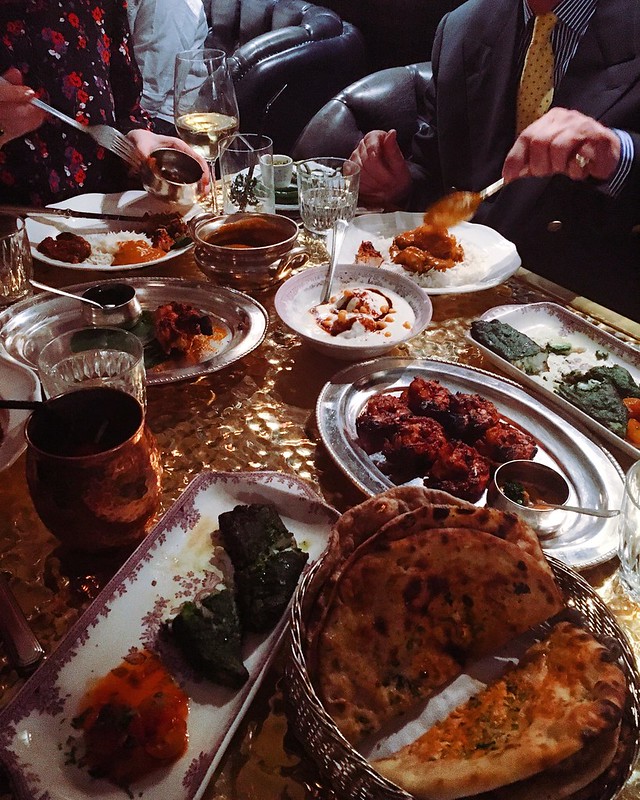 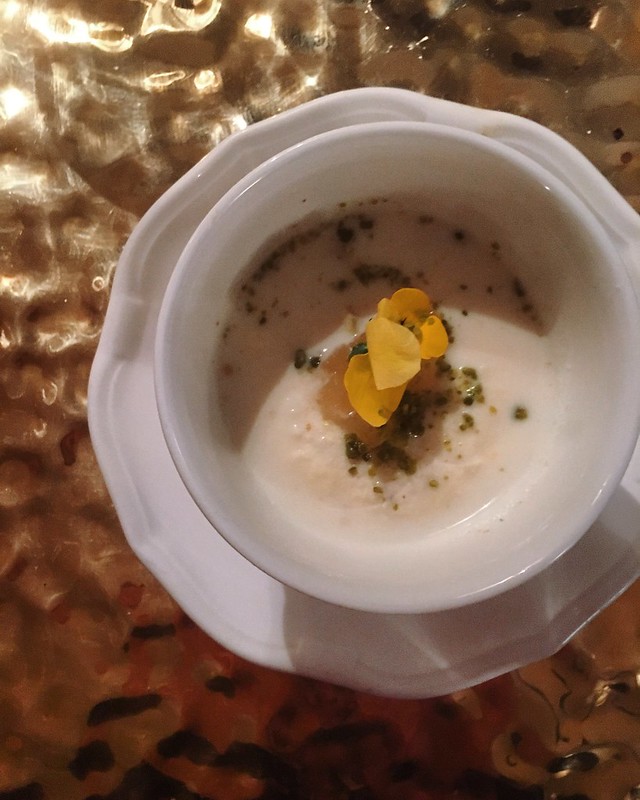 In writing about my meal at Gymkhana, I should probably first apologies to my Dad who back in June was gifted with the promise of a feast at Gymkhana for Father’s day by his good intentioned children, was only just brought there 6 months later in January. Well weren’t we lucky that it was worth the wait!

After a few dry January cucumber coolers at the bar, we took our seats at a golden table in the lavish club room downstairs. The walls decorated with black and white photos of a time gone India, as well as a few terrifying taxidermy animals. You are probably starting to get the idea that a meal at Gymkhana is not going to be great for the bank account and to put it bluntly it won’t, particularly when also treating your parents so soon after the bank-crippling times of Christmas. However, we did find some relief in the very reasonable Taste of Gymkhana set lunch at £35. Being the crafty family of six we are, we ordered 4 set lunches exploring all the set menu had to offer, but also allowing us to dabble a little with the à la carte which I highly recommend doing.

Our set menu started with a heavenly bowl of potato chat, chana masala and tamarind. This arrived with the beetroot chops pav from the à la carte, a sort of spiced breadcrumbed beetroot potato cake in a small bun topped with a deep fried chilli and a sesame and peanut chilli. Spectacular things already. The next arrival of plates was another à la carte order of delicate South Indian fried chicken wings and from our set menu a spicy bowl of chola kulcha with Indian lemon pickle and an eye-catching dish arriving with a cone shaped dosa, underneath the delicious Shukha lobster and shrimp with coconut chutney.

Then came the real feast. From our set menu the most delicious and succulent guinea fowl, tandooried with mango ginger and a leg chat. A delicate hariyali bream, richly flavoured coated in a forest green colour. This all came served with baskets of naan, pillowy rice, dal maharani, baingan masala and a dish of dahi bhalle –  lentil dumplings in a cool yogurt swirled with sweet chutney providing much needed refreshment to our spicy feast. With this we had to also add the lasooni wild tiger prawns with red pepper chutney and especially for my dad a curry of dakshini langoustines. The deserts were less lip smackingly exciting, however a welcome palate/spice cleansing end in the form of saffron and pistachio kulfi falooda with poached pear, and ras malai with apple murabba. 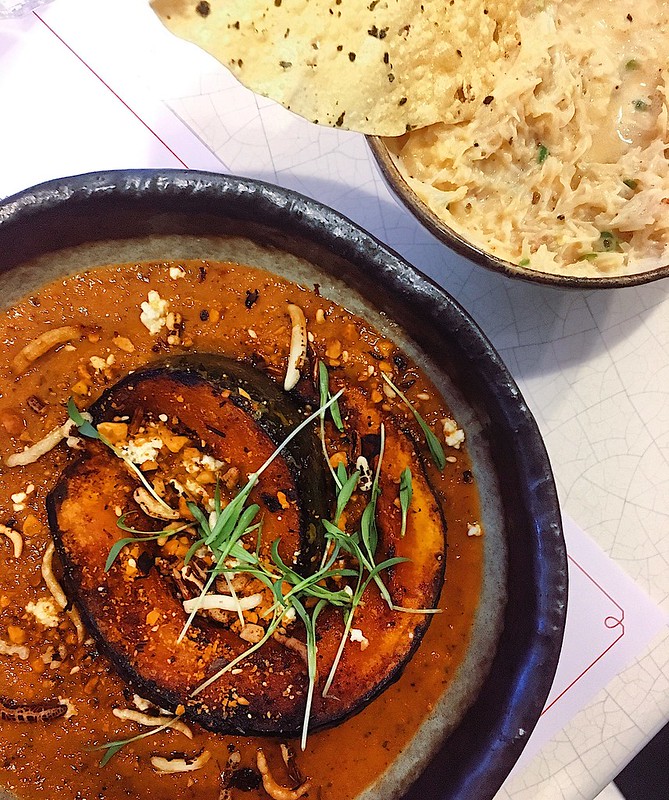 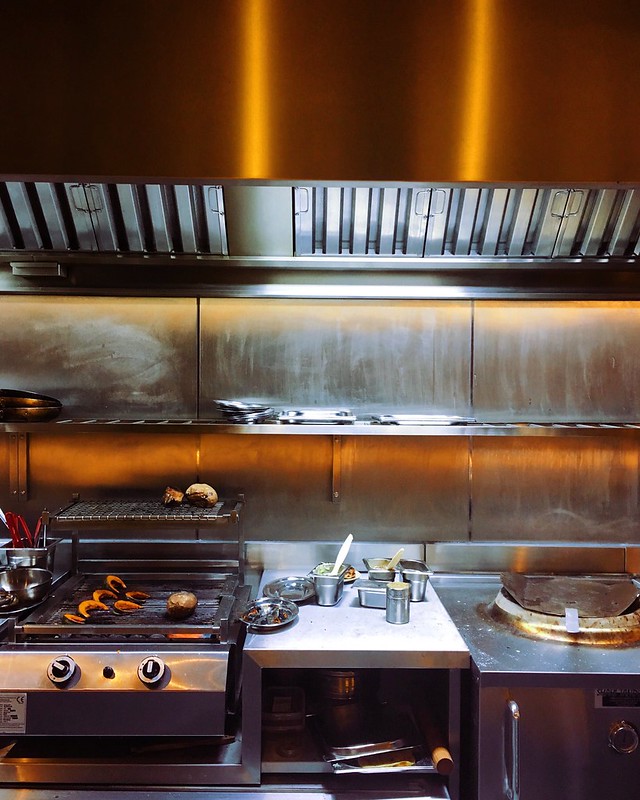 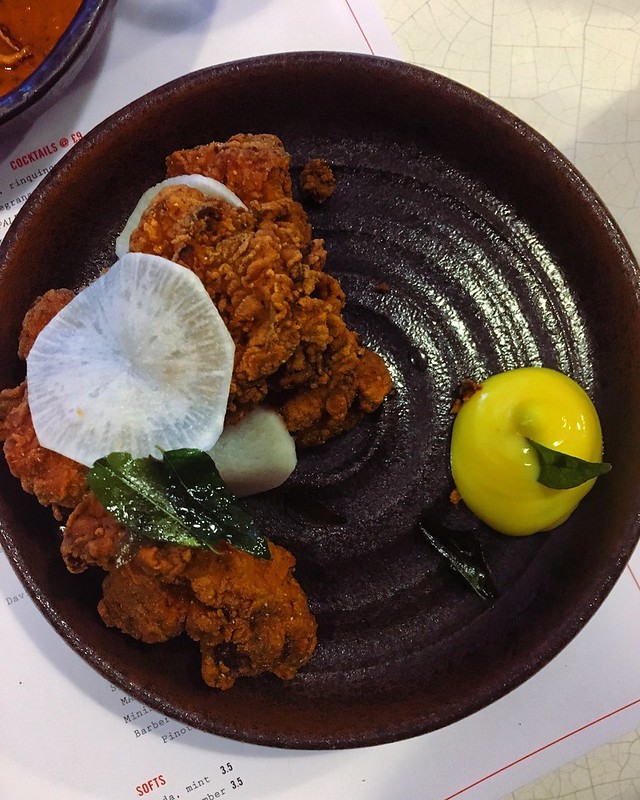 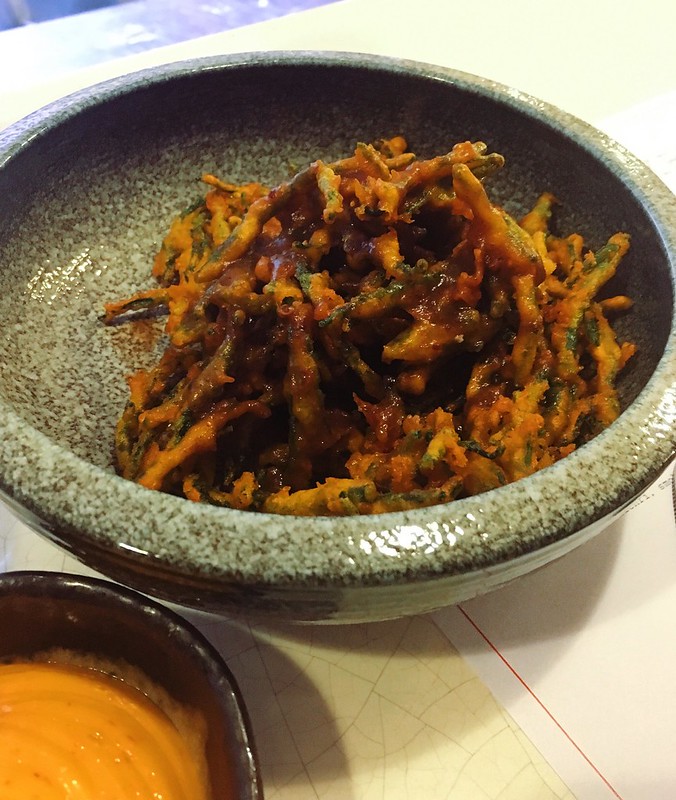 A few weeks later I was back in the area to have dinner with a old friend, this time on the slightly more financially friendly side of Piccadilly Circus. The newly opened Kricket in Soho is the second outpost of the brain child of Will Bowlby and Rik Campbell, their first being in Pop Brixton. In their own words this restaurant is “a modern memoir of time spent living and working in Mumbai” where they combine British ingredients with the authentic flavours of India to create a selection of absolutely wonderful Indian inspired small plates.

Our meal began perched overlooking the exciting open kitchen, my favourite seat in any restaurant. We ordered a delicious and indulgent bowl of butter garlic crab with shards of seaweed papad. A plate of kerala fried chicken with curry leaf mayonnaise and pickled mouli that has given the fried chicken of RawDuck and Bao a reason to panic. We then shared a bowl of crispy, melt in the mouth samphire pakoras with sweet date & tamarind chutney served with chilli garlic mayonnaise for dipping, and a delicious bow of delica pumpkin curry – a makhani sauce with fresh paneer, hazelnut crumble and puffed wild rice. It was wonderful, and mopped up with a masala kulcha. Our final dish was the duck leg kathi roll. Undocumented because it was too delicious to stop and snap, it was a spicy minced duck sausage shape cooked in a tandoori oven, rolled in a crispy kathi with peanut chutney and pickled cucumber. We were defeated by the time it came to ordering pudding so gave it a miss but our neighbours desserts looked beautiful. I have plans to return again in April for a big birthday feast, but I fear this may not be soon enough.