In the summer I got the chance to spend a week at our Chicago office and that was a week that became a marathon of eating.

Armed with a album of instagram screenshots and my bible that was the bon appétit Chicago city guide. I set out to cover as many of the Chicago food groups I could. Burgers. Pizza. Hot Dogs. Tacos. Donuts. and so on. 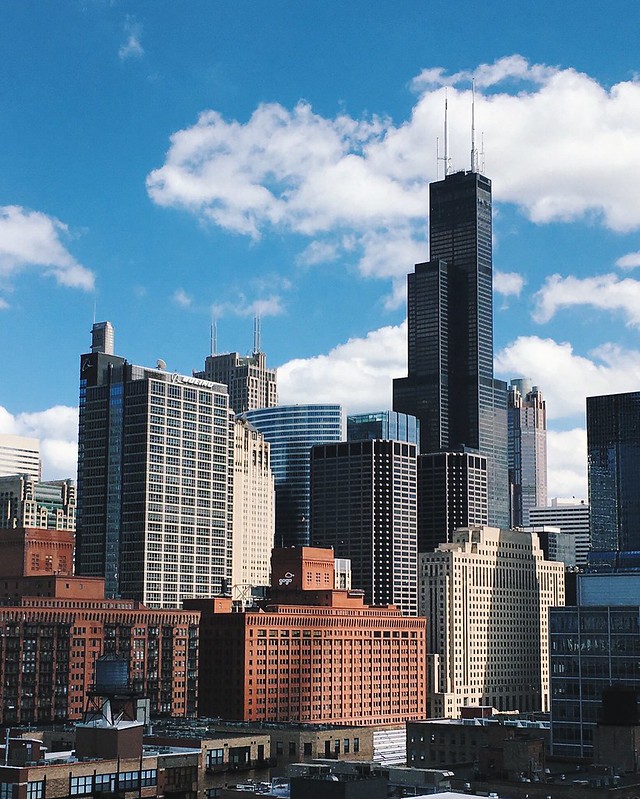 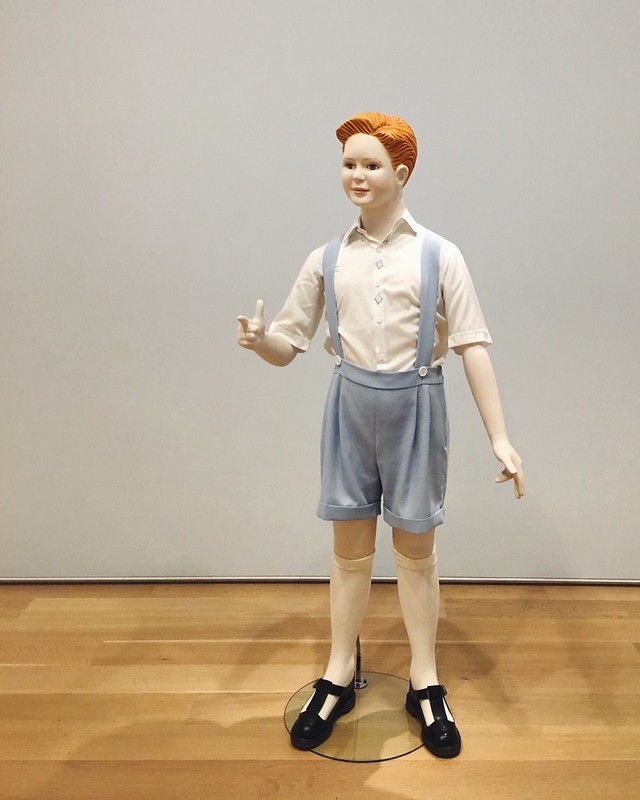 After dumping my bags, and a quick visit to the local market to stock up on apartment essentials (cinnamon bun flavoured oreos, cheez-its, reese’s everything) I headed off to explore the city and to work up a appetite. Once I had taken a obligatory selfie reflected in Anish Kapoor’s bean, and having found my doppelgänger in the form of a sculpture at the stunning Art Institute it seemed it was time for dinner.

I was lucky to be staying close to my company’s office perfectly located off West Randolph street, which just so happened to be at the epicentre of my culinary hit list. Tonight’s dinner was avec. A fabulous and heaving little no reservations spot with wood burning ovens and Middle Eastern flavours that I managed to squeeze into and claim a spot at the bar overlooking the open kitchen (perks of eating solo found). 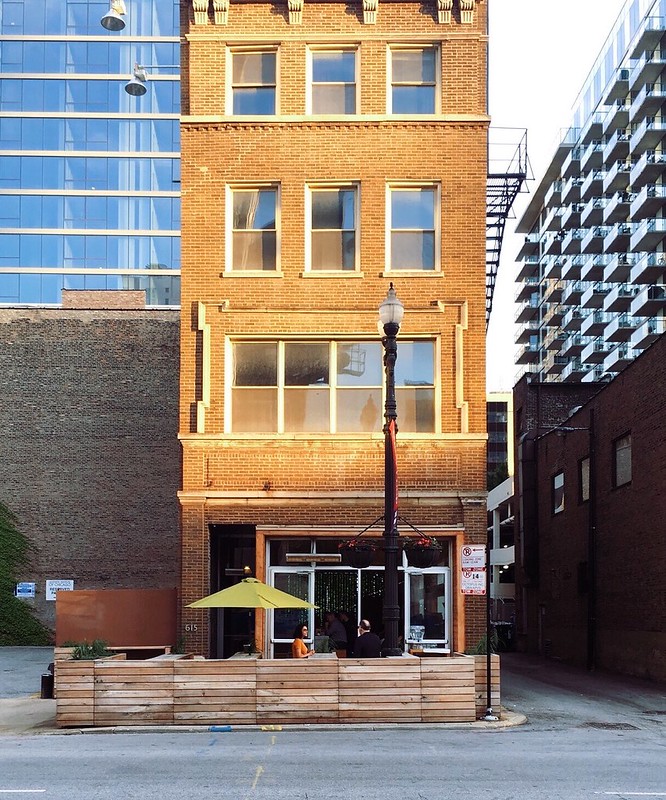 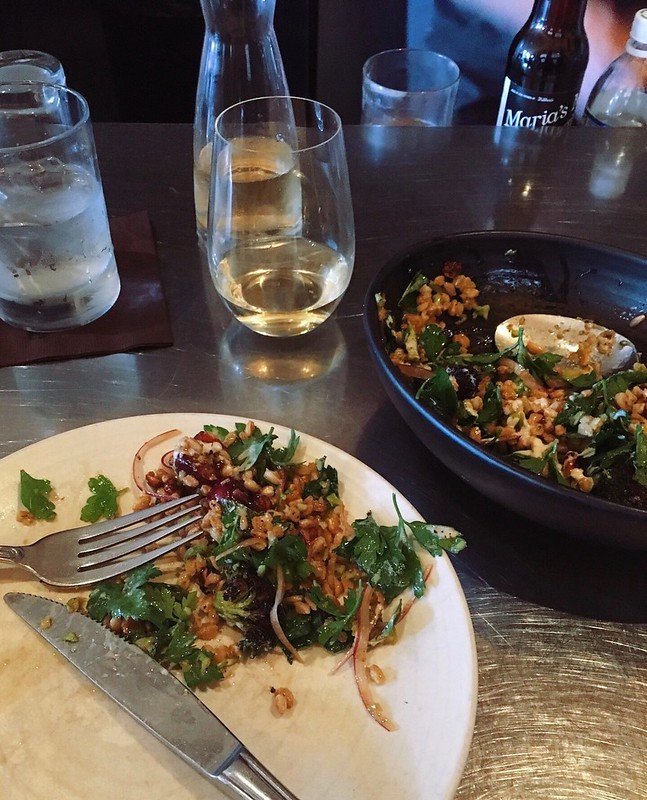 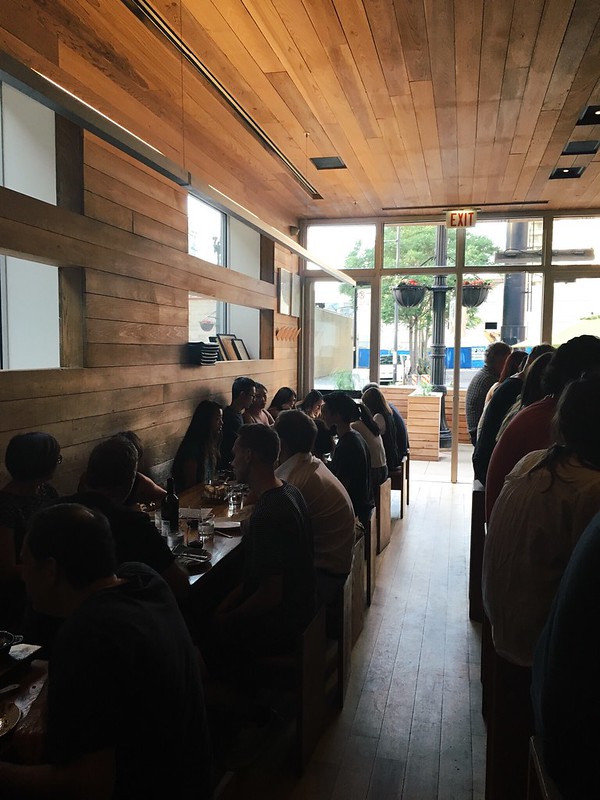 I ambitiously over ordered as there were too many things I needed to try (issues with eating solo found). I feasted on merguez sausage with rock shrimp, sheeps milk, and coriander chermoula and then a delicious charred broccoli tabbouleh with cherries, farro, peanuts and tahini. Having eased myself in… I then went for some of the restaurants famous chorizo stuffed dates with bacon piquillo pepper-tomato sauce that could definitely rival duck & waffles delicious ones. I left for the much needed walk home, not forgetting my defeated leftovers of course.

The next day I woke up hungry. I headed up to the trendy area of Logan Square to check out the much talked about and very charming Lula Cafe for brunch. I ordered the overwhelmingly indulgent cornbread french toast with rhubarb compote, whipped mascarpone and sweet corn crumble. It was fantastic. 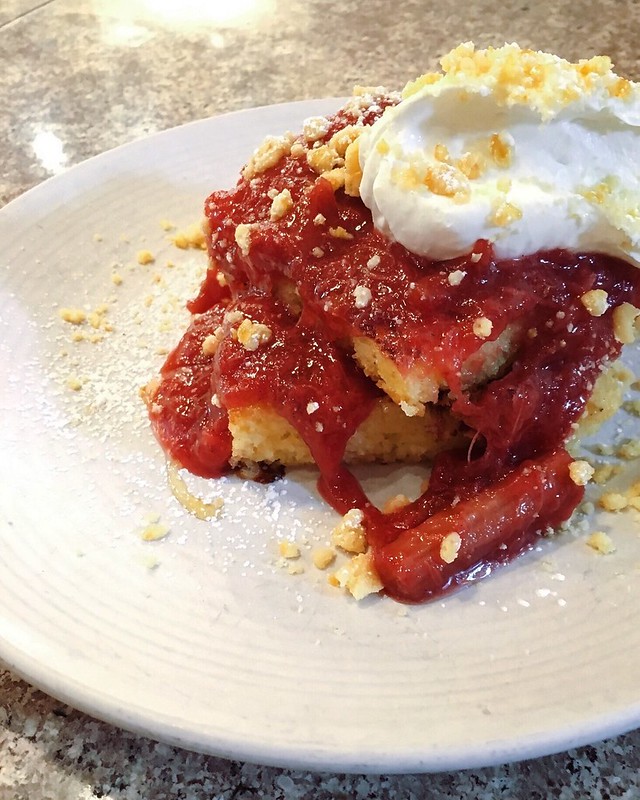 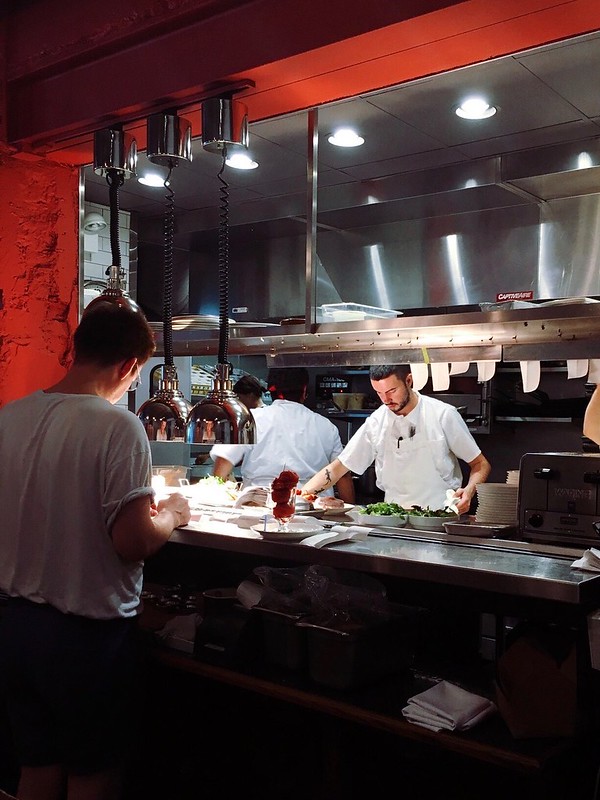 Once recovered I headed back in to town and onto an architectural boat tour around the city that I highly recommend for anyone visiting. Continuing on the architectural theme I braved the crowds and long queues and headed to the sky deck of the Wallis tower to face my unknowing fear of heights. Thankfully some time had passed since brunch. 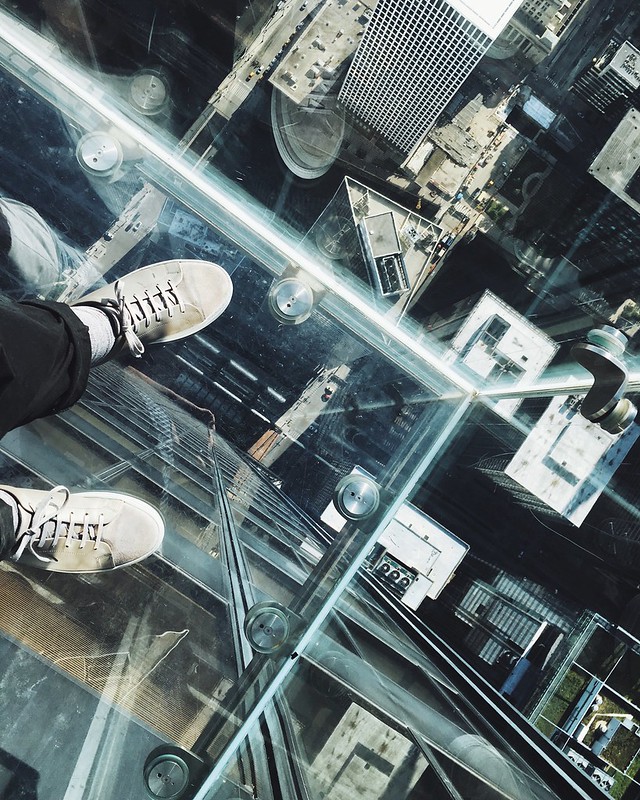 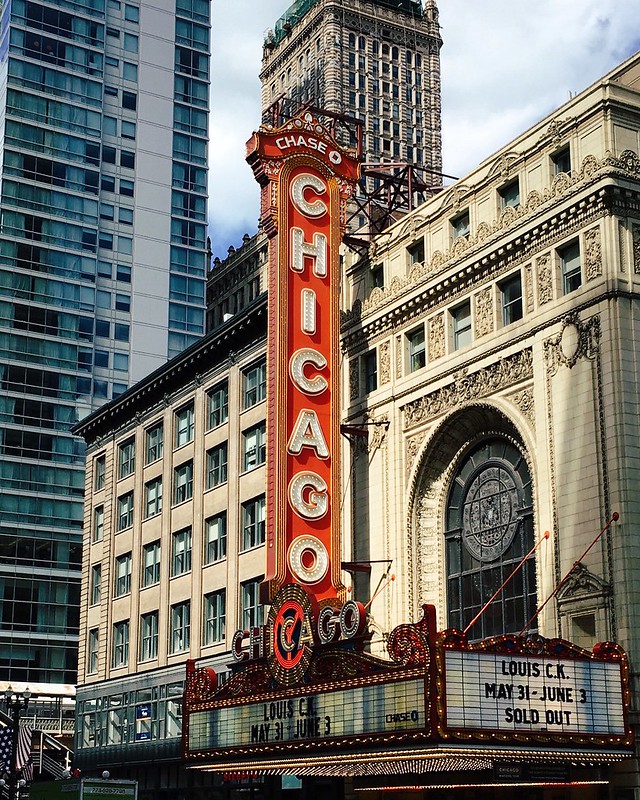 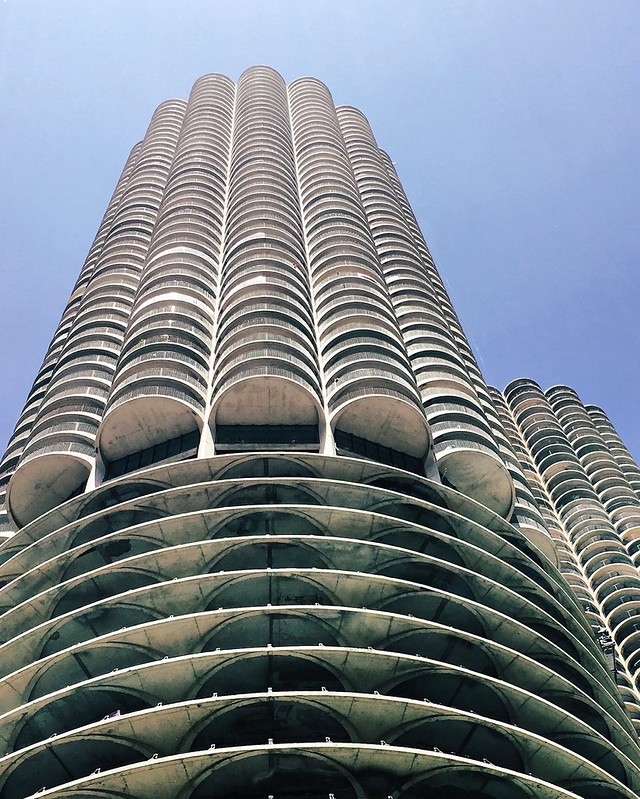 Later that week I begged my coworkers to take me to lunch at Au Cheval which I had heard talk of being the best burger in Chicago/America. They more than happily obliged. Another no reservations spot on West Randolph, we had to get there at 11:30 on a Tuesday and still we got the last table but it was sure worth it. I went for the cheeseburger topped with a fried egg and it was magic. Possibly the best burger I have eaten… I should have gotten the bacon too.

After that we slowly rolled our selves back to the office in the summer heat, stopping in at La Colombe for there cold brew coffee on tap that I had quickly developed a addiction to by this point of the trip. 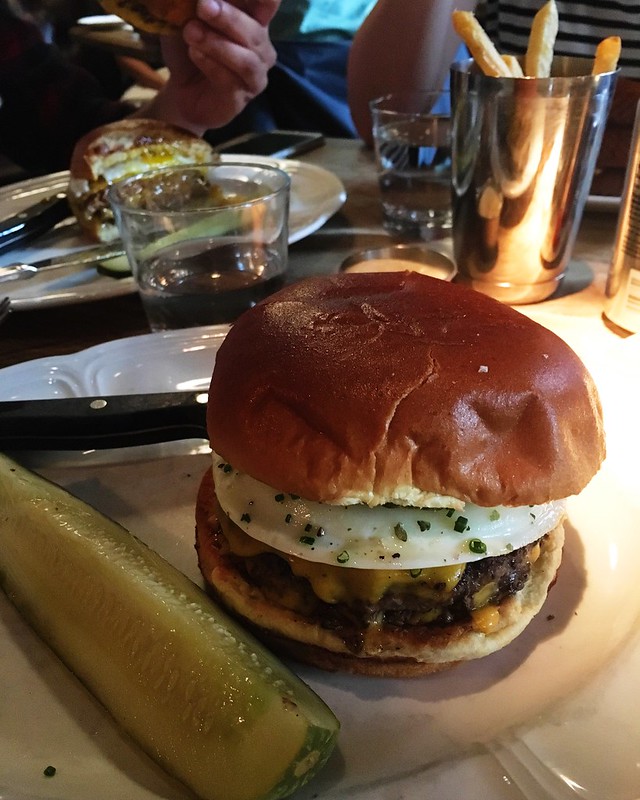 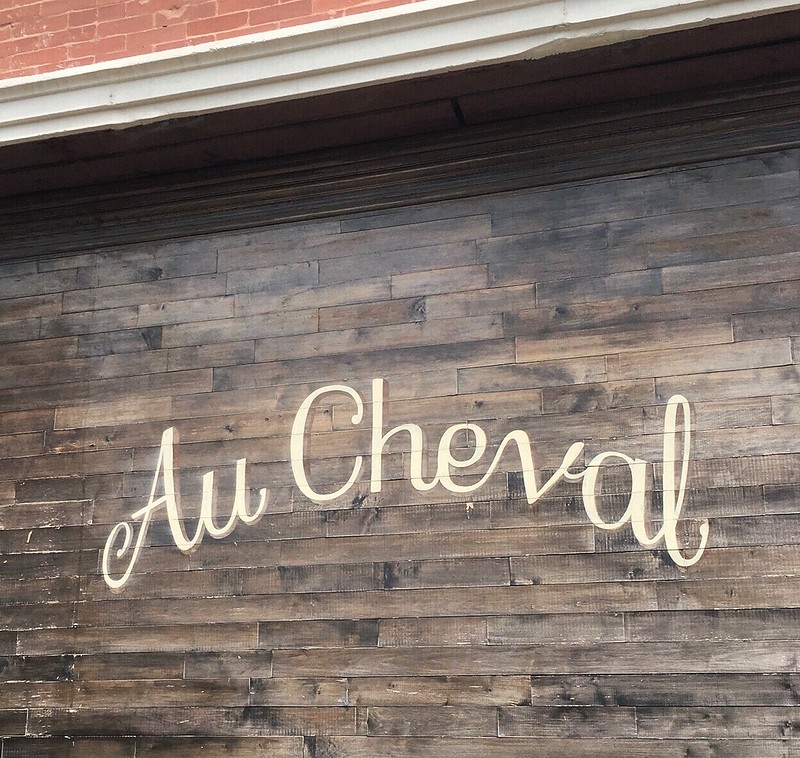 The next day there was more lunch time gluttony as we went to grab sandwiches at Publican Quality Meats. A butcher shop, cafe, bakery and gourmet market this wasn’t no Tesco meal deal or Waterloo greasy spoon. Spoilt for choice I went for ‘The Big Dippe’ – Sweet and spicy wagyu beef brisket, green garlic aioli, radish, jalapeno and snow pea slaw on fresh ciabatta bread. I can confirm this was the best sandwich I have ever eaten. The store/cafe itself is great and I returned again to buy a range of spice rubs and sauces before I flew home. 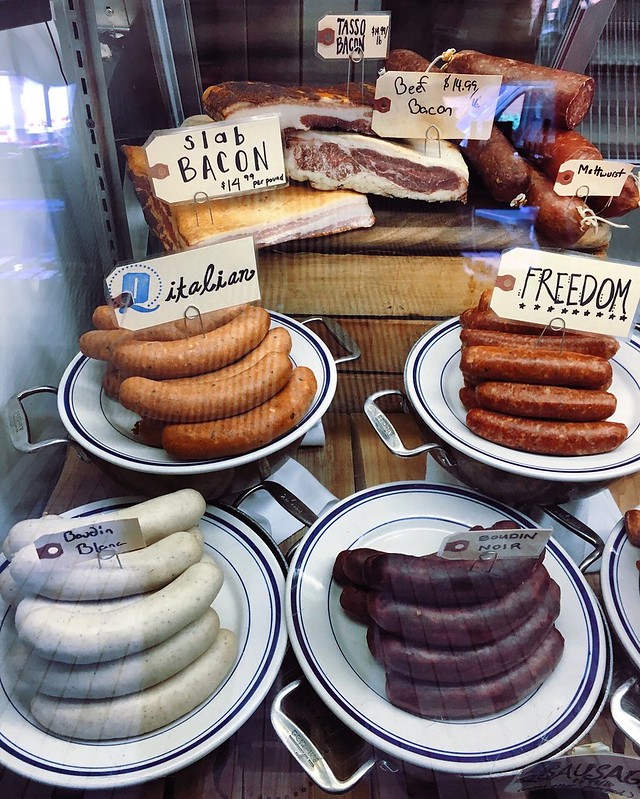 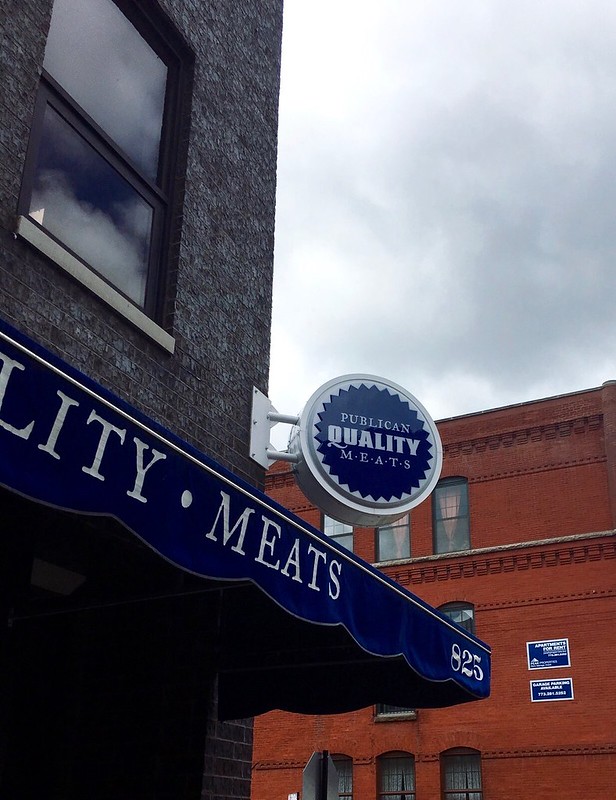 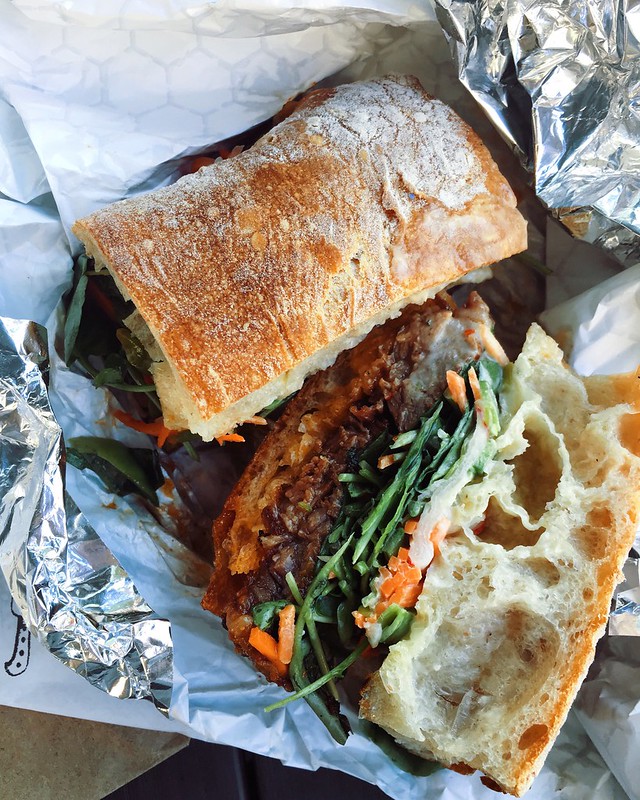 On Friday I stopped in at Glazed and Infused, a incredible donut shop with flavours like ‘Maple Bacon Long John’ and ‘Mexican Hot Chocolate Snowball.’ I picked up a box for the office as it was national donut day, my last day in the office and I also sensed there would be some sore heads after a evening of vodka shots in a strange Polish dive bar which ended in my first taco bell experience. 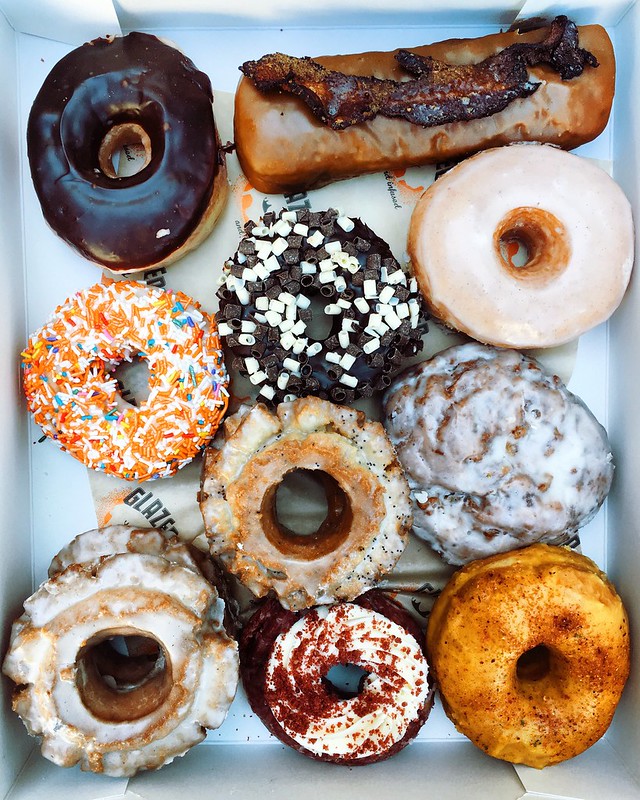 After another night of dive bars, hot tamales, and a curious yet delicious mash potato topped pizza at Piece, a brewery and pizzeria in Wicker Park, it was brunch time again.

I headed back to Wicker Park to Dove’s Luncheonette to both line and stretch my stomach for the day of drinking and eating I had ahead. A Southern/Mexican inspired diner with a delicious menu and a intimidating bar stocked to the brim with tequila and mezcal. I ate a breakfast of Burnt ends hash – crispy potatoes, brisket burnt ends, poblanos, tossed with aioli and quesso fresco, with two fried eggs, scallions and Texas toast. Together with the refilling coffee and the spicy bloody maria it was everything I needed. 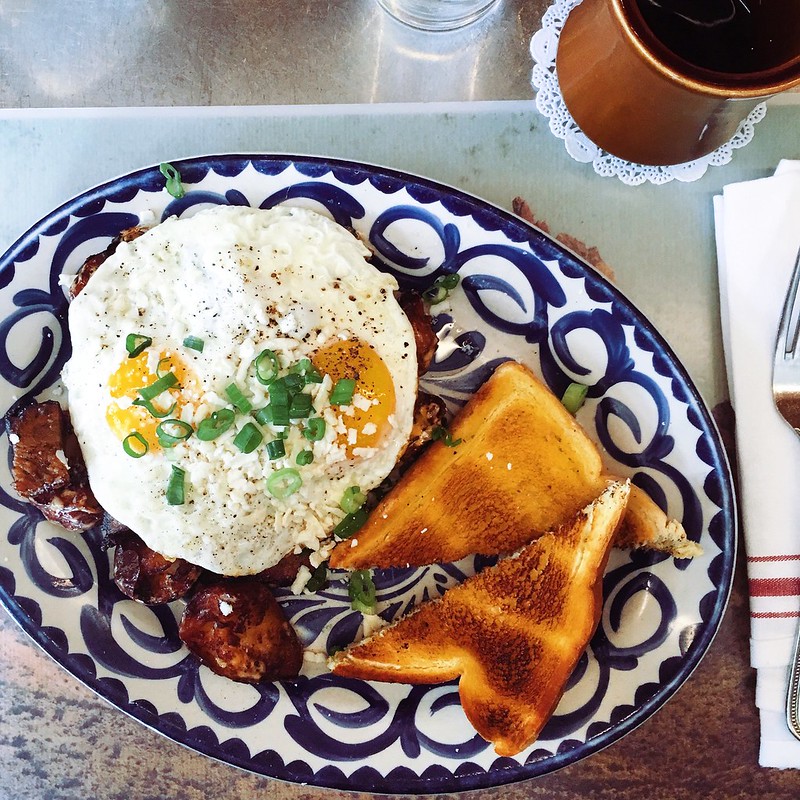 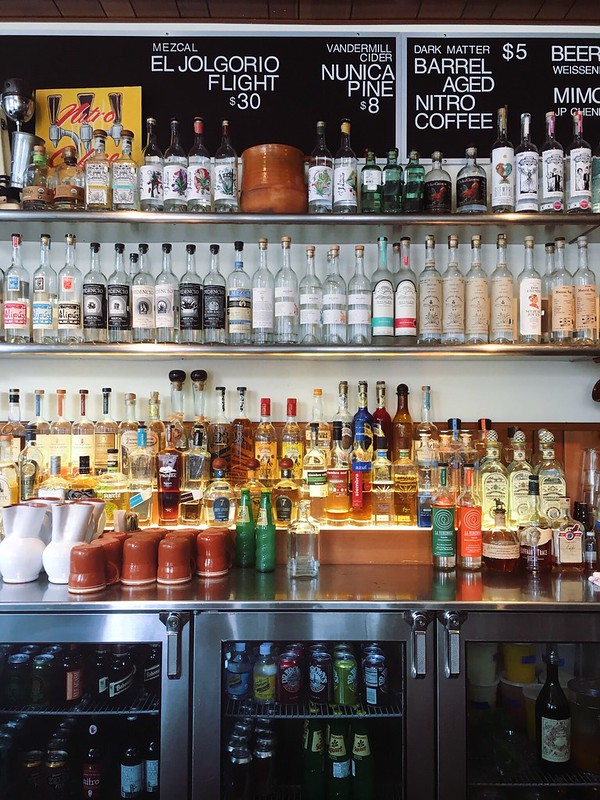 After breakfast it was around the block to my friend Babs’ house for Bloody Mary’s, before hitting the DoDivision street festival for music, beers and food truck goodness. After a few more drinks it was food time again when we snacked on empanadas and some very devilish deep fried oreos. 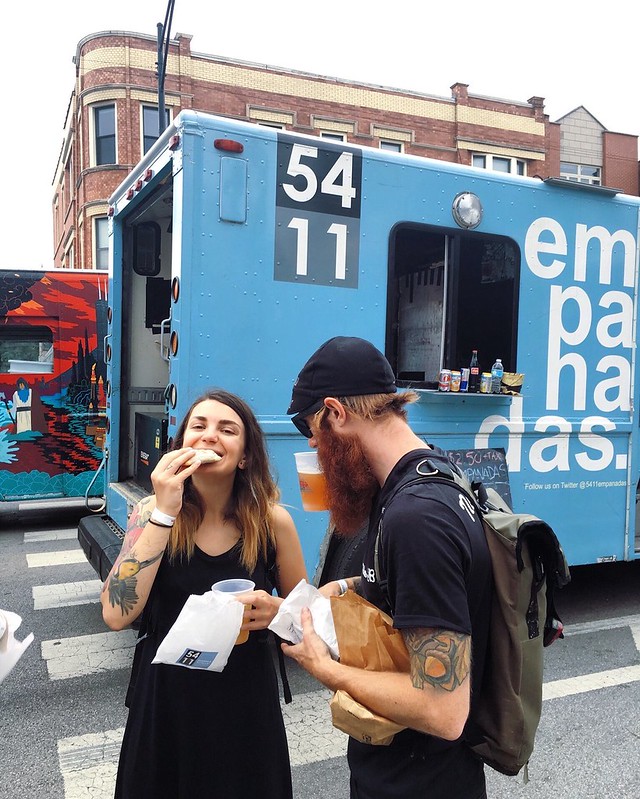 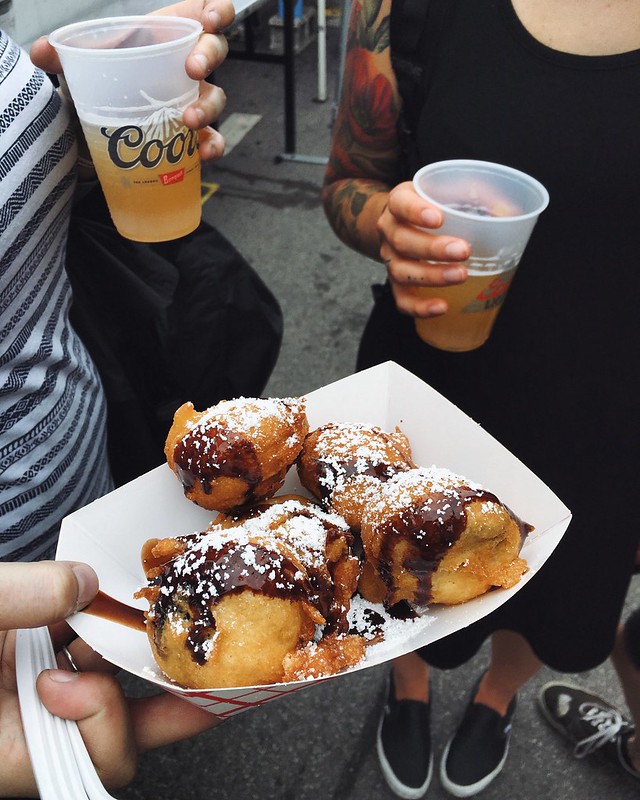 Some hours later and for the last stop of the day we headed to Big Star Tacos, to tick of my final food group. A great spot in Wicker Park with a taco selection that obviously puts Britain’s idea of Mexican food to shame. 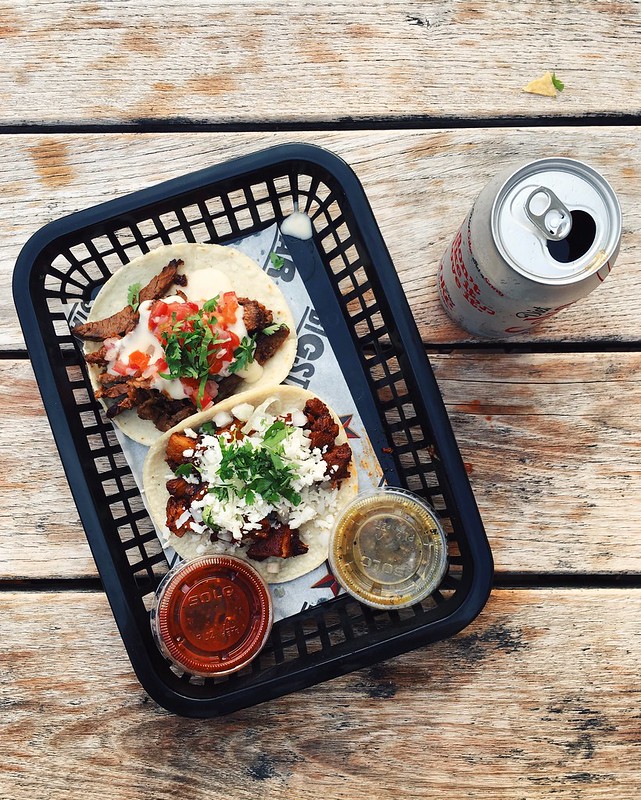 The next morning before heading to the airport there was time to fit in one last brunch at Little Goat on West Randolph Street. My last meal did not disappoint. A great diner and off shoot of the acclaimed Girl and her Goat across the street. I ate sesame cheddar biscuits with eggs, Szechuan sausage, chilli garlic sauce and blackberries. It was game changing, and the perfect way to end a week of pure indulgence of the best kind. It was then off to the airport and to having salad everyday for at least a month. 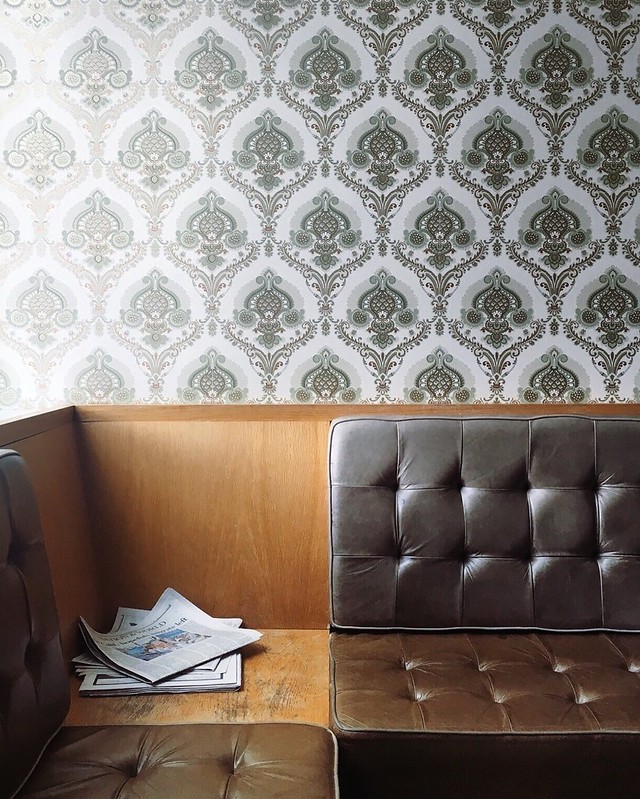 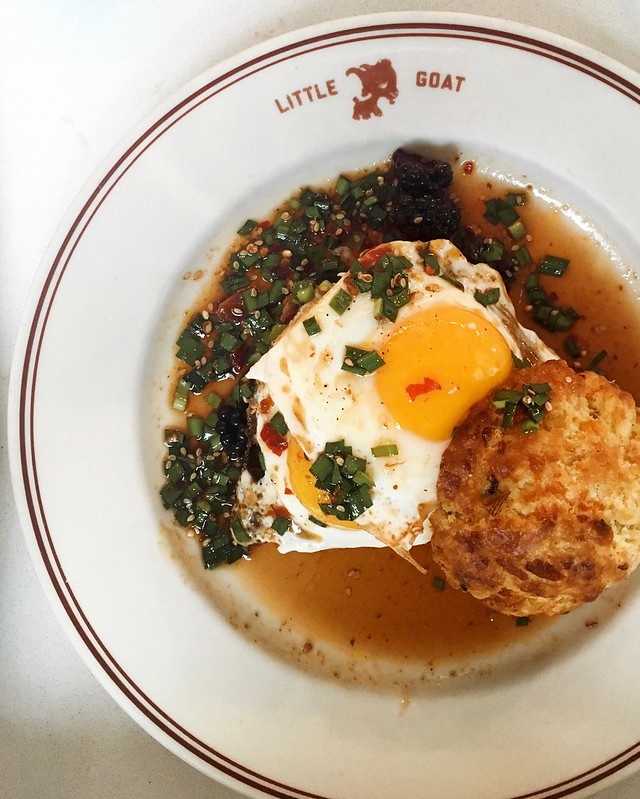 NEXT TIME (Places I missed)